Back to Latest Articles
Environment development

Thomas Iuliano
Co-Founder of Artheria
Concept Art – The visual design of the...
Posted on 1st June 2020 by Thomas Iuliano

I can claim that Vajont’s concepts have grown as the general idea of the work itself matured. Since the appearance of the characters in the piece are inspired by real-life characters, my visual research process has been more focused on the environment, both internal and external.

The visual design of the interiors were developed almost simultaneously with the creation of the script. And, so, as Iolanda’s overall idea and vision grew stronger and more advanced, I felt the focus of what I was being asked to do changed from inspiring the director, to instructing the modelers on how to create the level design.

Being an experience set within a precise historical context, my starting point was to recreate an internal set design that was as coherent as possible with the era and the geographical area identified by the narrative. Italy is made up of so many different territorial micro-identities that it was really important for us (at least at the beginning) to be able to describe the place through a single glance, communicating through furniture and furnishings the where and when.

Interior concept – Initial version. Already in this initial sketch you can find the main points of interest – hotspots – foreseen by the script: the window, the tap, the radio, the clock.

Our initial aim — Iolanda’s first and foremost, and mine in reflection — was the reproduction of a space that is as faithful as possible to a house of medium-low social extraction.

I carried out in-depth research into the style of the houses of the time, the furniture, the objects on stage, in a process that in concept art is almost as important as the visual development itself: the research of visual references. 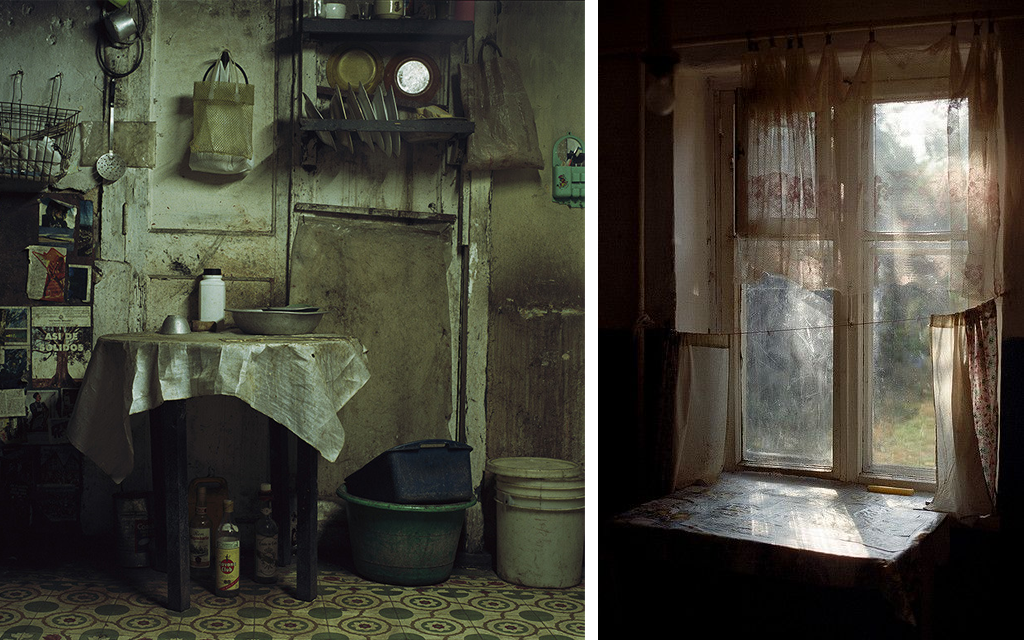 Some images I used as a source of inspiration in the initial phase, to help me ‘visualize’ the mood of the project – Images taken from Google. The copyrights belong to their respective owners.

The evolution of the project

Normally, the production of a multimedia experience (be it cinema or VR) involves a process of rewriting the initial idea and the screenplay to improve the product as a whole. Subsequent versions of the script take into account all the problematic aspects that emerged during the first draft, from the practical (e.g., redefining a scene to reduce the budgetary impact) to the narrative. This process also brings an evolution of the director’s vision.

We therefore understood that a setting that faithfully recreated the North of Italy during the Sixties was not enough. That what we should have been looking for was elsewhere: we didn’t need an aseptic simulation of a past reality, but a personification of it. Able to communicate not only with an Italian audience, but to an international one.

So we needed a process of broadening the initial idea, and consequent symbolization. It was necessary to create a kitchen that was able to respect that territorial micro-identity, and at the same time synthesize it, so that an idea of Italy could be recalled also in the perception of non-native people.

But that’s not all.

One of the images I used as reference – Image taken from Google.

The design of furniture and objects

In the process of script rewriting, another fundamental aspect had emerged, until then dormant or not adequately considered: In order for the experience to have a real emotional impact on the participant, it was necessary to build a relationship between the environment and the characters. In a nutshell, it was necessary to transform an ‘ordinary’ house into the house of two specific people, with a daily life and passions.

So, I made a detailed study of the furniture and objects to be placed in the environment. In other words, I started my references research process again. I was inspired by the sets of Italian films made in the Sixties – just as I studied how current films represent the Sixties – and by family photos I found on the web.

The research process was not very simple: at the time there were few people who owned and knew how to use a camera. The vast majority of the images of the time are weddings and confirmations.

Other references – images taken from Google

I then went on to understand which furniture to put inside the environment. Many were necessary for the script–others were not. So, I gave free rein to my imagination in identifying the type of drainer, the type of sink, the type of sideboard to give the environment a lived-in look. Mostly, I based myself on the magazines of the time and the second-hand goods selling sites. 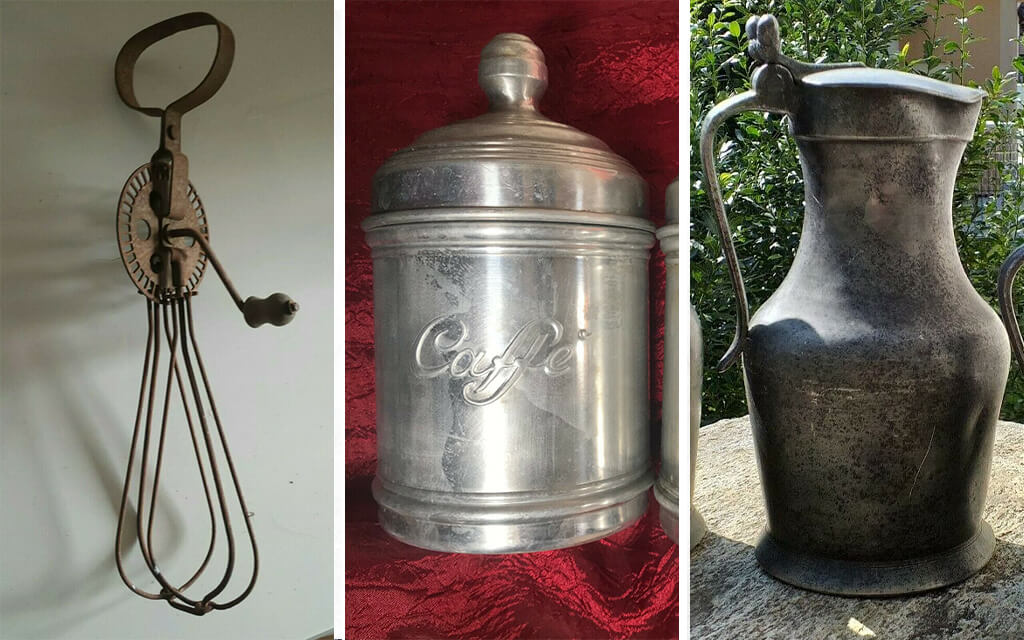 ‘Vajont’ is set in a space that is halfway between a kitchen and a living room, in a place that recalls the idea of a hearth and family warmth.

Since the size of the VR room is exactly the same as the maximum surface area that can be tracked using the lighthouse of the Vive – the headset we chose for this experience – I decided to use two different bands of colours on the walls. The colours will help to widen the perception of the space by making it appear multi-dimensional.

I also decided to define the environment by placing the kitchen – and the related objects – on a wall. In contrast, the opposite wall was intended to accommodate the typical elements of the living room, such as the sideboard, the radio, and the coat rack. In the middle, the dining table serves as a watershed element. Additionally, I assigned each wall to a character. The kitchen area has thus become the mirror of the wife – the place of her passions, her tastes, her vision – just as the opposite wall has become the home of her husband’s identity.

I worked a lot on the management of the ‘full’ and empty spaces, so that the balance between the objects did not suffocate the perception, nor is it too spacious.

Finally, I included some small usability tricks in my concepts, such as reducing the size of the non-interacting window, to discourage people from trying to open it. 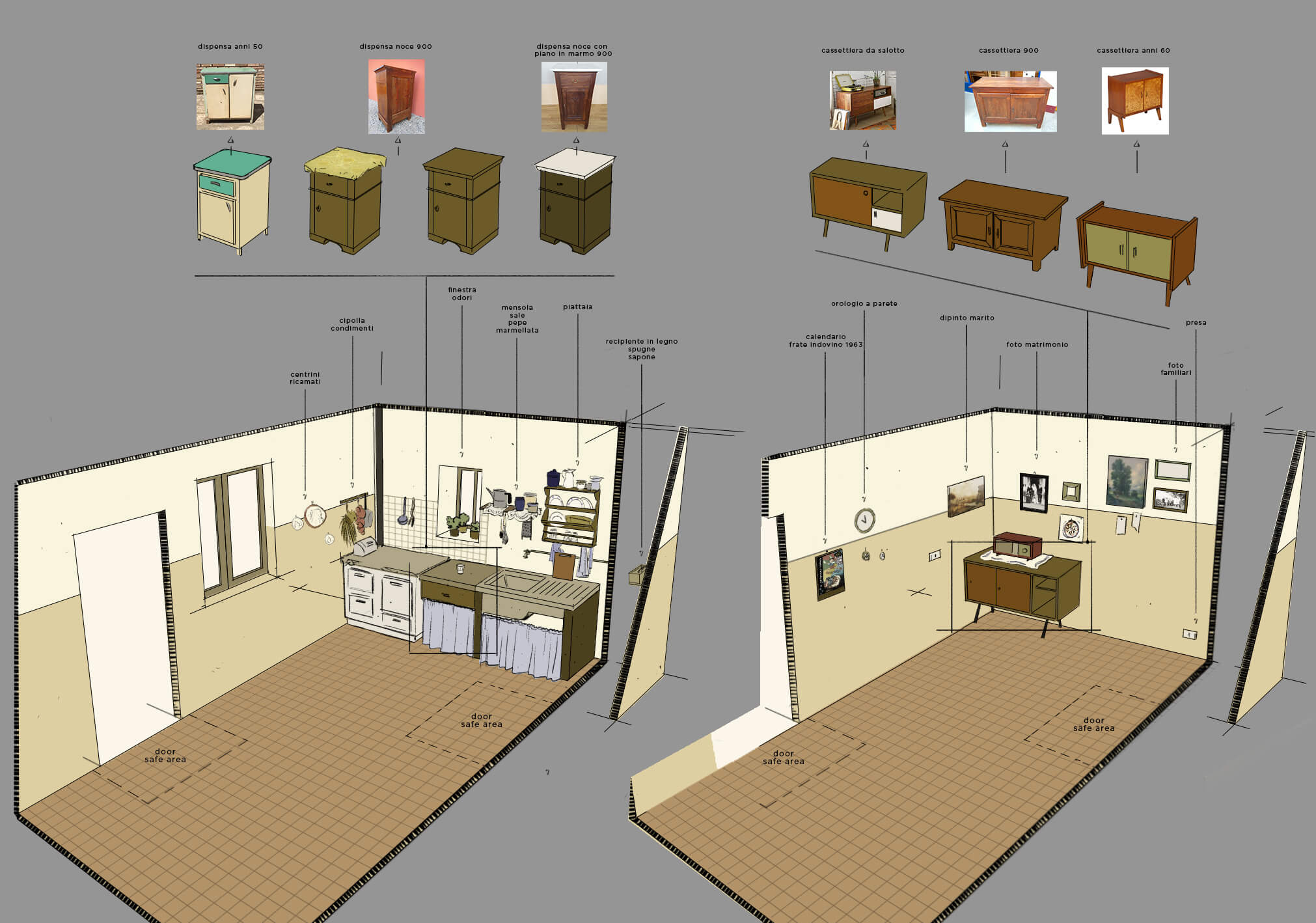 Concept of the interior of the room. For each area, I identified different choices of possible furniture.

The next step was to identify a general color palette, capable of ‘working’ with the different lighting conditions foreseen by the script. I started by identifying different types of color schemes (analogous, complementary, and triads), then proposed a range of different hypotheses. 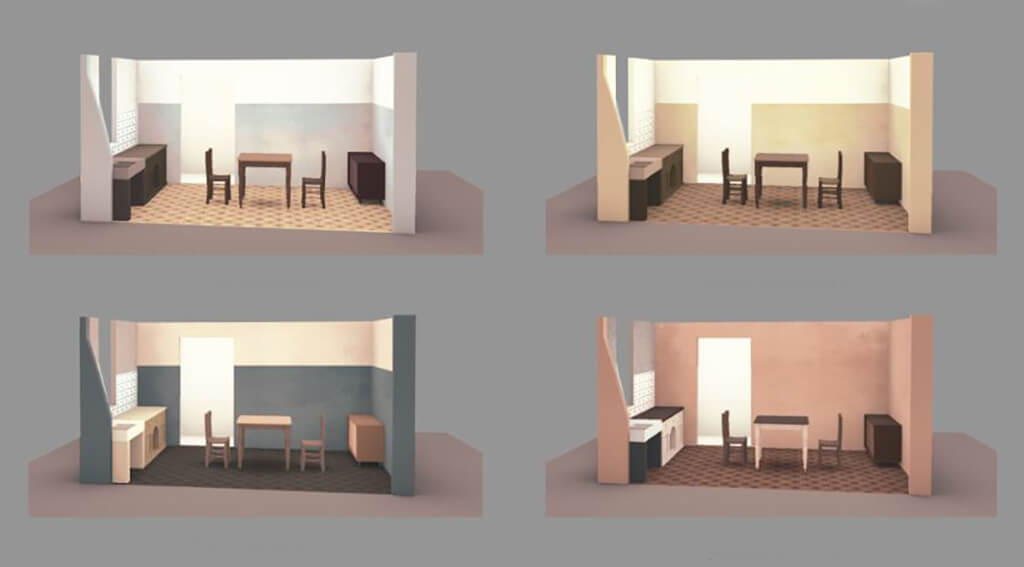 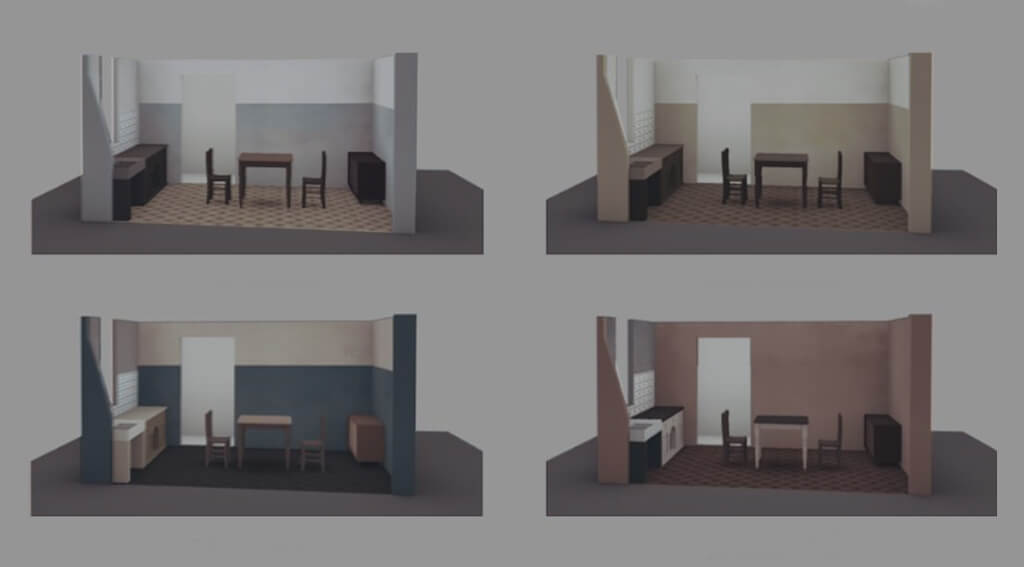